On 13 November the OSCE Academy, with the support of the OSCE Programme Office in Bishkek, hosted the OSCE’s “Debating Perspectives 2030 Roadshow” first event in Central Asia.  The event brought together 38 young women and men from the region, including the alumni of the OSCE Academy, to discuss their ideas and visions for a safer future.

“I am always delighted to see how the OSCE Academy, a flagship project of the OSCE, contributes to shaping a generation of young professionals who combine a love of Central Asia with an openness for new ideas that can benefit security and development across the OSCE region,” said Ambassador Tuula Yrjölä, Officer in Charge/Secretary General and Director of OSCE Conflict Prevention Centre, opening the event.

Ambassador Pierre von Arx, Head of the OSCE Programme Office in Bishkek, added: “Recognizing the growing role of youth in helping address comprehensive security challenges, the Programme Office works towards facilitating the participation of youth in decision-making and continues to work towards strengthening professional networks among the youth of Central Asia, Afghanistan and Mongolia.”

The Director of the Academy, Dr. Alexander Wolters, and the Senior Researcher of Friedrich Ebert Stiftung Regional Office for Cooperation and Peace in Europe, Dr. Alexandra Dienes, also welcomed participants and stressed the positive role of youth in contributing to a culture of peace and dialogue.

The Roadshow focused on the findings of the “Engaging Youth for a Safer Future” discussion paper, which was produced by the OSCE Perspectives 2030 Core Group of Experts (CGE) in 2019. This Core Group was comprised of 22 young women and men, who reflect the geographical diversity of the OSCE area, and came from a wide range of professional backgrounds including academia, civil society, policy-making, and the media.

“My education at the OSCE Academy provided a backbone for going into the world of international organizations, and participating in the Perspectives 2030 Initiative,” said Abdulvahhobi Muminjoniyon, Academy alumnus and CGE member. “Engaging in dialogue with other young people inspired me to act for a better future.”

This is the second “Debating Perspectives 2030 Roadshow” to be held, following the launch event in Albania on 30 October. The Office of the OSCE Secretary General and the Friedrich-Ebert-Stiftung promoted it. More events are to be organized in the coming months across the OSCE region. Conclusions from the discussions will be published in a policy paper with recommendations. 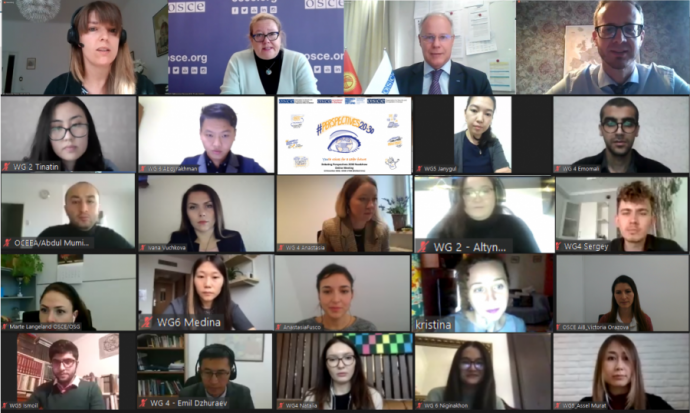