On 22 January 34 students of the MA Programmes in Politics & Security and in Economic Governance & Development received their degrees and graduated from the OSCE Academy in Bishkek. This has been the first Graduation Ceremony held in a hybrid format, which was a forced measure caused by the COVID-19 pandemic. The Bishkek-based graduates and invited guests joined the ceremony in person, whereas some of the students coming from other countries of Central Asia and Afghanistan joined via Zoom.

Dr. Alexander Wolters, the Director of the OSCE Academy, welcomed state officials, members of the Diplomatic Corps, partners and donors as well as parents and friends of the graduates, and gave an overview of the challenging 2020 academic year. During the opening speech, Dr. Wolters also expressed the Academy’s sincere gratitude to the Board of Trustees, donors and partners for advocacy, guidance and continuous support that allows creating all the necessary conditions to provide world-class education to the youth in Central Asia and beyond.

The Ceremony was opened by the online address of the OSCE Secretary General Helga Schmid, "Now that you embark on your career paths, I encourage you to be ambitious and positive about the future. A new beginning is always challenging in life but you have already demonstrated ample resilience and determination to achieve your goals.”

Following the Secretary General's message, Ambassador Pierre von Arx, Chairperson of the Board of Trustees of the Academy and Head of the OSCE Programme in Bishkek, during his speech underlined the commitment and perseverance of students in finalizing their studies despite the unexpected setbacks of 2020. The Ceremony was also attended by Dr. Nurlan Omurov, the Deputy Minister of Education and Science of the Kyrgyz Republic, who also congratulated students and emphasized that “This year’s graduates are special, because this year you faced new challenges and I am sure that you successfully coped with it. This experience will help you in future to easily adapt to the realities and new challenges that the world might bring to you.”

The keynote speech was delivered by Prof. Alexander Cooley, Director of Columbia University's Harriman Institute from New York City. Prof. Cooley’s advice was, "Become 'brokers' of different countries viewpoints, cultural perspective, and languages; stay connected to one another, these are bounds that do not go away; and give back to the Academy by becoming an active part of what the OSCE Academy is."

Dr. Indra Overland from the Norwegian Institute of International Affairs (NUPI), one of the Academy's major donors and long-time partner, sent his greetings to the graduates and highlighted that they will receive special support from NUPI in the year to come for their missed opportunities during the COVID-19 pandemic.

Following the speeches students received their Diplomas awarded by Ambassador von Arx and Dr. Wolters in person and via Zoom. The programme continued with the announcement of nominees for Best Thesis awards and Top GPA Awards by Dr. Anja Mihr, DAAD Associate Professor. Nominees received certificates and prizes for their outstanding academic achievements. 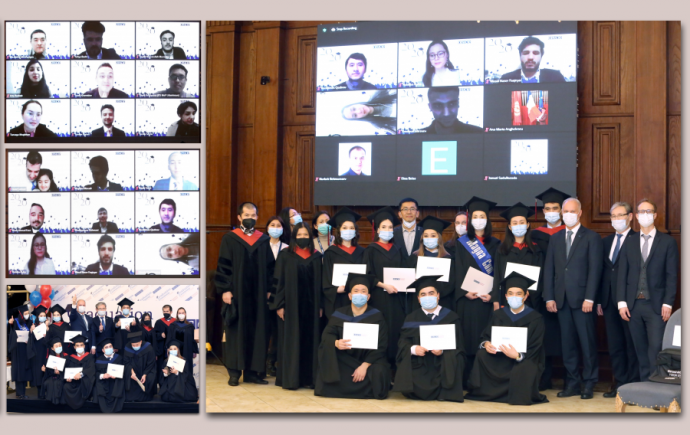