ALUMNI SPOTLIGHT: Future for all Children

We would like to introduce our next success story – meet Umedakhon Pulotova, an alumna of 2017, MA Programme in Economic Governance and Development from Tajikistan. Currently, Umedakhon is working as Project Coordinator in two projects in the health-focused NGO “Ranginkamon” in Khujand, Tajikistan. The organization’s mission is to support the inclusion of children with disabilities in the society through the revitalization of family members of these children, the establishment of rehabilitation centres, education and training of specialists, and the organization of support in order to create an inclusive society.

Umedakhon is responsible for all key areas of the projects' implementation. Among her recent achievements was her trip to Mongolia in July 2019, when she represented her organization at the 4th Asia-Pacific Community Based Inclusive Development Congress.

The main results of her organization’s activity are that now parents are not hiding and shy of their disabled children. The parents began to communicate with each other. Attendance of children with disabilities in public schools and kindergartens has improved. Finally, more than 300 disabled children and their parents received free classes on movement, speech and behavioural therapy, as well as 4 inclusive schools and 4 inclusive kindergartens were opened in 4 rural areas.

Additionally, to a great work that Umedakhon already does, when she read Nargiza Zhakypova's success story in Alumni Magazine SalamAlum, she came up with an idea to open programming school for kids. In December 2019 Umedakhon participated in the leadership training organized for alumni of the OSCE Academy and used this trip to Bishkek to meet Nargiza and discuss possible cooperation with her programming school IT RUN. After the negotiations, they agreed to cooperate with the IT RUN franchise package. With the help of her friends, Umedakhon co-opened a “New Algorithm” programming school in Khujand. In February 2020, the “New Algorithm” signed an agreement with IT RUN and within a month its employees from Bishkek trained New Algorithm’s teachers, shared teaching methods and training materials. On 27 March IT RUN opened its doors to the children aged 6 to 16 to learn computer programming. During weekends, Umedakhon and her colleagues are giving open classes to tell the parents more about the courses. The “New Algorithm” has already formed several groups, but they still have a lot of work to do and many ideas to implement. We wish lots of success to Umedakhon in her tremendous endeavor! 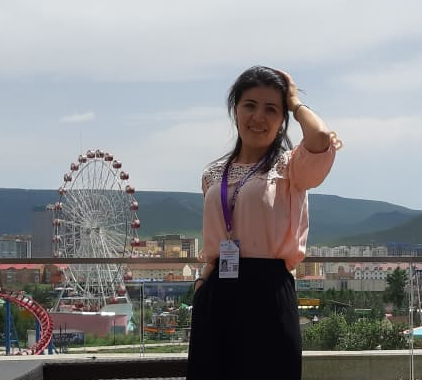