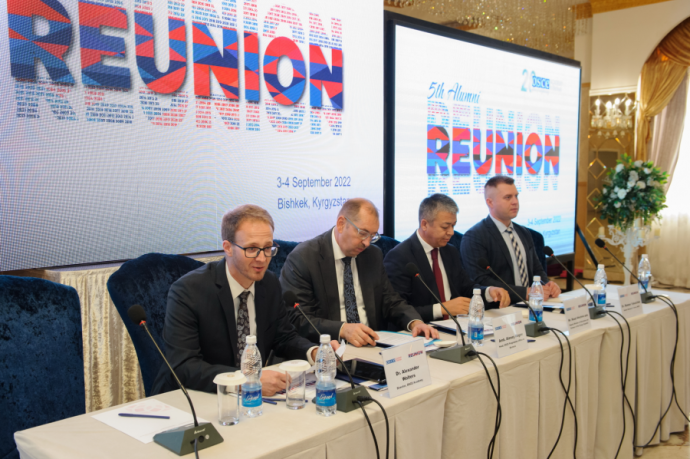 On 3-4 September 2022, the OSCE Academy celebrated its 20th Anniversary and welcomed back over 100 graduates of its MA Programmes to the 5th Alumni Reunion. Along with the alumni, current students, lecturers, staff, representatives of the Government of the Kyrgyz Republic, the Diplomatic Corps based in Bishkek, and Heads of several Universities and partner institutions attended various activities conducted within the Celebration and Alumni Reunion.

Dr. Wolters expressed his gratitude to the OSCE Programme Office in Bishkek, the Kyrgyz Government, and the many donors, especially NUPI and the Norwegian Ministry of Foreign Affairs. Furthermore, the Director of the Academy provided an overview of the activities of the OSCE Academy over the past 20 years and plans to expand its MA Programmes, as well as establishment of new PhD Programme.

Following the opening speeches, the former management of the OSCE Academy discussed the development of the Academy throughout the years in a panel session “OSCE Academy: 20 years of Enlightenment”. Dr. Tim Erkenhans, Dr. Maxim Ryabkov, Dr. Pal Dunay, and Ms. Violetta Yan shared the main challenges the Academy faced and the results it achieved during their leadership.

The opening part of the event also included a panel of discussion on “Central Asia and 30 years of Change: Towards new Norms and Values” by experts from Central Asian countries. Prof. Dr. Alisher Faizullaev, Independent Scholar and Author, Dr. Saniia Toktogazieva, Associate Professor of Law at AUCA, Mr. Daniyar Kosnazarov, Head of Marketing and Communications KPMG in Central Asia, and Dr. Diana Digol, Political Officer UNOCT Uzbekistan, delivered a review of 30 years of the Independence of Central Asian countries.

In the afternoon, graduates returned to their classrooms to participate in simultaneous workshops. Dr. Roman Vakulchuk, NUPI, and Kasiet Ysmanova, Central Asian Barometer, led a workshop on “Leadership on Science: A Thousand or One Step from an Idea to a Publication”, Dr. Nuria Kutnaeva, Personal Data Protection Agency of the Kyrgyz Republic, - on “Digitization: Protection of Personal Data”, Dr. Rahat Sabyrbekov, OSCE Academy, - on “Climate Change in Central Asia”, and Prof. Dr. Alisher Faizullaev led the workshop on “Negotiation Skills”.

Formal Reception concluded the first day of the Reunion dedicated to the 20th Anniversary of the Academy.

Amb. Alexey Rogov, Head of the OSCE Programme Office in Bishkek, highlighted that it is very symbolic to celebrate this year the 30 Year Anniversary of the Kyrgyz Republic joining the OSCE and the 20th Anniversary of the establishment of the OSCE Academy. “We look optimistically into the future of the institution, considering the successful launch of Bachelors Programme (BA) in Economics this year, in addition to the expansion of MA Programmes and development of PhD Programme in upcoming years”.

Ms. Begayim Nurlan, First Secretary, Department of International Organizations, Ministry of Foreign Affairs of the Kyrgyz Republic, noted the high-quality postgraduate education at the Academy and underlined “… for us the OSCE Academy has become a model of cooperation of youth representatives of various countries and nationalities inheriting the OSCE space”.

Ms. Maria Raczyńska, Special Representative of the OSCE Chairman-in-Office on Youth and Security, also expressed support for the Academy and stressed its importance in uniting the Central Asian region.

Ms. Merete Wilhelmsen, Senior Adviser of Section for Russia, Eurasia and Regional Cooperation, Norwegian Ministry of Foreign Affairs, addressed the graduates, students, lecturers, staff and distinguished guests online and highlighted that Norway is a proud supporter of the activities of the Academy. “The Norwegian Ministry of Foreign Affairs in close cooperation with the Norwegian Institute of International Affairs has supported the Academy since the beginning. Our key motivation is to unlock the potential of young people by contributing to high-quality education.”