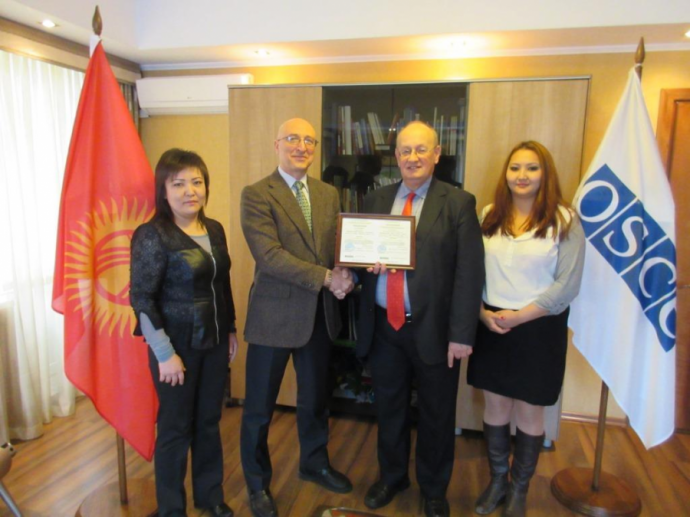 On 18 February 2016 The Kyrgyz Ministry of Education and Science issued a new license for the OSCE Academy’s Master’s Degree programme in Political Science with focus on Central Asia. Sergey Kapinos, the Head of the OSCE Centre in Bishkek, today presented the license to the Academy’s Director Pal Dunay at the OSCE Centre’s premises.

He reminded that the Academy has been contributing to the development of young intellectuals in Central Asia through its academic and executive training programmes, as a centre for dialogue and of policy-oriented research.

During the ceremony, Dunay emphasized the importance of the Academy’s operation in the country: “The Academy is a truly regional initiative of the OSCE that promotes regional co-operation, conflict prevention and good governance in Central Asia through offering post-graduate education, professional training courses and intellectual exchange.”

As of 2015, more than 330 young professionals had graduated from the OSCE Academy’s Master of Arts programmes. Most of the graduates work in national administrations, civil society and at universities.

The OSCE Academy uses premises provided by the Kyrgyz Government and offers post-graduate Master of Arts programmes in Politics and Security, and in Economic Governance and Development. The majority of the students are from the five states of Central Asia, and since 2008 also from Afghanistan. The Academy is supported by the OSCE Centre in Bishkek along with extra-budgetary funding from 22 of the 57 OSCE participating States and in-kind donations from several educational institutions in those States.