"We cannot make the event less bloody, but we can show that we are not afraid" - Nikolay Pavlov on the reporting of terrorist attacks in the media 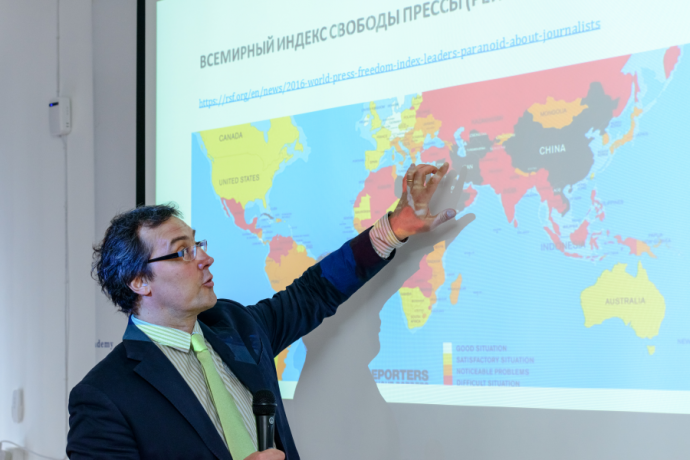 On May 23, 2016 Mr Nikolay Pavlov, journalist, and producer at the Washington DC Bureau of Thomson Reuters Video News gave a public lecture at the OSCE Academy on "Professional reporting of violent extremism and international terrorism in the media". The lecturer’s experience is more than 20 years and he has covered the terrorist acts in Dubrovka ("Nord-Ost") and the Beslan school hostage crisis, among others.

The speaker stressed the importance of accuracy, truthfulness and promptness in reporting of the terrorist attacks. "By showing the violence of the terrorist attacks to our audience we are helping the terrorists to reach their goal, to intimidate people. We cannot make the event less bloody, but we can show that we are not afraid. Reflection is stronger than beam, use the tactics of reflection", - said Nikolay Pavlov speaking about preparation of journalistic materials on radical extremism and terrorism.

During the lecture, Mr Pavlov spoke about the personal safety of journalists in the hot spots and the importance of cooperation with state authorities. Particularly, Mr Pavlov emphasized that journalists should approach the process of preparation of such materials with responsibility and wariness, avoiding premature judgments and showing the broader picture of what is happening.

The lecturer also showed concrete examples of successful and unsuccessful cases and gave some practical tips to follow while preparing materials about a terrorist attack:
1. Keep the balance
2. Check the data and facts
3. Do not distribute or create rumors
4. Do not use evaluative terms
5. Use neutral language
6. Do not give the word to terrorists, do not publish their statements, and do not disseminate their materials
7. Respect the dignity of the victims and their loved ones.

Participants of the lecture had a chance to ask the speaker a few questions about how to deal with gradual "extinction" of investigative journalism, the monopolization of the information market and what a journalist should do if he became a witness to an act of terrorism.

The lecture was organized by the OSCE Centre in Bishkek jointly with the OSCE Academy.