On 19 March 2015 the OSCE Academy hosted the Russian Ambassador to the Kyrgyz Republic, H.E. Andrey Krutko, who held a public presentation on the Russian foreign policy in the CIS. The event gathered a large audience consisting of the students and staff of the OSCE Academy as well as interested diplomats and experts.

Ambassador Krutko in his introduction gave an overview of the reasons why the Russian Federation acted in favour of the Russian speaking population of the Crimea and how the decision followed by a referendum has met the requirements of the right to self-determination. Among the main reasons, protecting of Crimea’s population from nationalist threat was prominent. The danger of the appearance of NATO forces in Crimea and the termination of the presence of the Russian Black Sea Fleet complemented that concern. The ambassador expressed his view that without Russia’s support Crimea could have shared the fate of Donbas.

As far as the relations between the Russian Federation and Kyrgyzstan, Ambassador Krutko emphasized the multiple aspects and the mutually advantageous nature of cooperation. It extends to cooperation in energy matters, economic investment and assistance, free movement and settlement of people, cooperation in military matters and military technology as well as in culture. The accession of Kyrgyzstan to the Eurasian (Economic) Union (EaEU) carries many advantages. Kyrgyzstan will be a more favoured destination to Russian investment Russian know-how will arrive to different sectors, including agriculture. The energy cooperation that has already been consolidated with the establishment of Gazprom Kyrgyzstan will result in providing every part of the country with gas. The system will work adequately. The expansion of the supply network and the reliability of supply will be much to the benefit of the country.

With the free settlement of Kyrgyz citizens to Russia (and other EaEU members) there will be no need for migration card for extended period of stay and those working there will have guaranteed healthcare. Due to the importance of remittances for the Kyrgyz economy this is going to be an essential guarantee of development.

The presentation was followed by an intensive question and answer period. It extended to issues about the eventual shortcomings „downsides” of the Customs Union, the problems with the supply of milk and milk products from Belarus to the Russian market as a concern for other members of the EaEU that may not meet veterinary standards. The question emerged how long we can speak about the „return of the population to the motherland” in the context of Crimea and eventually elsewhere and also whether the Russian Federation is re-evaluating her foreign policy.

Ambassador Krutko emphasized that Russia would like to avoid double-standards so that some countries would „close their eyes” on international law is some context (e.g. Kosovo) and apply different standards in others. It was also mentioned that the Russian Federation has been interested in the status quo since the end of the Cold War while NATO moved closer to her border that represents a threat. 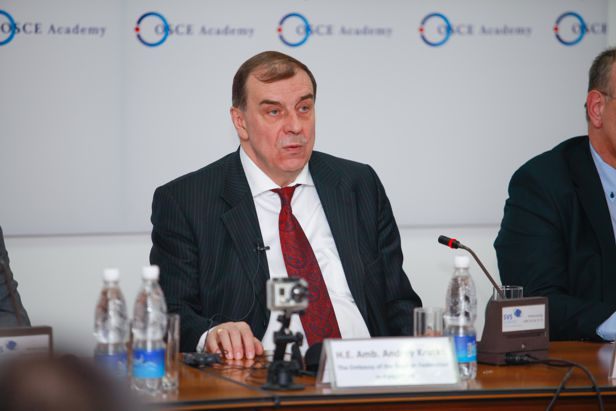