On 3 April 2015, the Secretary General of the Collective Security Treaty Organization (CSTO) Mr Nikolay Bordyuzha delivered a public talk at the OSCE Academy, focusing on the role and capacity of the CSTO in addressing regional security challenges in Central Asia.

Speaking of Central Asia, Mr Bordyuzha stressed that the overall security situation in the region has been clearly deteriorating, particularly in light of the developments in Afghanistan and the rise of the Islamic State in the areas not far away from Central Asia. These circumstances point to the importance of the CSTO as a truly collective security mechanism in the region. Addressing various assessments of the CSTO in the media, Mr Bordyuzha dismissed most “political scientists” who comment about the CSTO as people with little knowledge of the Organization. Most of the CSTO activities are not visible due to the nature of the Organization and its decision-making procedures, he said.

In his effort to map out the capabilities of the CSTO, Mr Bordyuzha stressed that high level political cooperation is of key importance. Acknowledging the fact that not all issues require military solution, the CSTO member states maintain active, regular and high-level political coordination, both of formal and informal nature.

Military power is clearly the evident strength of the CSTO. The Secretary General listed the Collective Forces of Rapid Deployment, consisting of 11 battalions, as well as the Collective Rapid Reaction Forces that include 22,000 troops and represent a unique combination of forces representing the interior and emergency ministries and the anti-narcotics agencies of the member-states.

Mr. Bordyuzha also noted that military cooperation between the CSTO member states successfully developed not only in the military-technical sphere, but also in the field of training of the armed forces, law enforcement, fire, rescue agencies and special services. Of special importance have been the operations of the CSTO, such as “Kanal” (anti-drug trafficking), “Nelegal” (focusing on illegal migration and trafficking in human beings) and “Proxy” (a project on cyber-security). Thus, speaking of the "Proxy" operation, the Secretary General stressed that during 2010 events in the south of Kyrgyzstan more than 10 web sites had been identified as directly or indirectly involved in stirring up the interethnic hostility.

During the questions and answers session, Mr Bordyuzha commented on the comparison between the CSTO and the Shanghai Cooperation Organization, calling the former a more cohesive and “local” security provider, while the SCO was rather a political entity with various economic, social and other issues on the agenda. Mr Bordyuzha also commented on Uzbekistan’s withdrawal from the CSTO, the prominence of non-traditional security threats and the Organization’s readiness to address those, and other related questions. 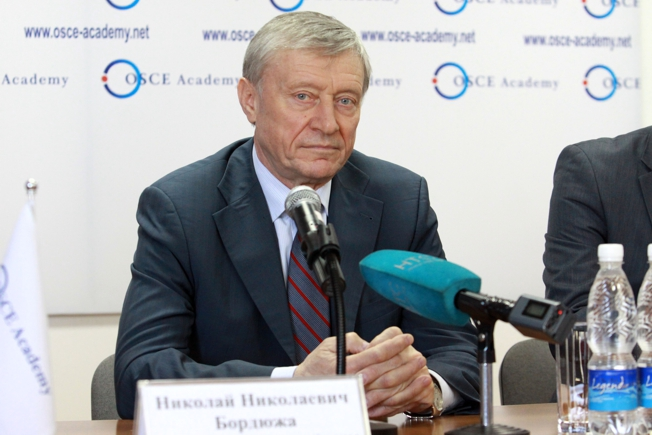