Public Lecture on Kazakhstan’s Experience of Building a Market Economy

On 9 April 2015 the Academy held a public lecture by Dr Roman Vakulchuk, senior researcher of the Norwegian Institute of International Affairs, on “Kazakhstan’s Emerging Economy: Between State and Market”. The presentation was based on the book recently published by Dr Vakulchuk.

Based on his extensive research, including over 150 interviews in Kazakhstan, Dr Vakulchuk argued that in the past 25 years of market reforms Kazakhstan has succeeded to develop a peculiar balance between the state regulation and market that could be called an innovative state capitalism..
Today, Kazakhstan is considered to be one of the most successful market reformers among the post-Soviet countries. Speaking about the economic growth and development of Kazakhstan, experts often overemphasize the country’s dependence on the production of natural resources, first of all, hydrocarbons. However, it is necessary to take into account that despite the fact that Kazakhstan's economy largely depends on the development and export of natural resources, the government has established effective political and economic institutions that have helped it avoid the 'resource curse' and attract significant foreign direct investment. Dr Vakulchuk stressed large gaps in the coverage of economic growth in other fields of business, without which the economy of Kazakhstan, in his opinion, could not be at the level of development where it is now.

Speaking about government regulation, Dr Vakulchuk emphasized that Kazakhstan is the most open Central Asian country in adopting successful management models of other states. This is also justified by the fact of employing international experts in leading positions in different private and public companies.

To date, the market of Kazakhstan is unique combination of different development and promotion strategies. Here the companies with Soviet system of regulation coexist with foreign companies committed to western values.

If the "core" part is fully controlled by the state and the activities of these companies are regulated, both by political and economic (market) mechanisms, then for the periphery, the government seeks to provide conditions for developing a market-oriented environment with little state involvement. Kazakhstan actively supports entrepreneurs by creating lightweight tools of business registration, licensing, preferential taxation and other favorable conditions.

Such an approach to the development of medium and small businesses, coupled with globalization, shifting from direct to indirect management, promotion of new ideas and attraction of new knowledge, the appropriate economic policy-making and the business climate improvement, allows to draw the conclusion that a balance between state and market regulation of the economy has been found.

The lecture induced many comments and questions from the audience, first of all the students of the Academy. During the discussion, Dr Vakulchuk shared his point of view on corruption in the context of economic growth, the difficulty of entering the market for start-up companies, the possibility of applying the model of economic development of Kazakhstan to other states, and others. 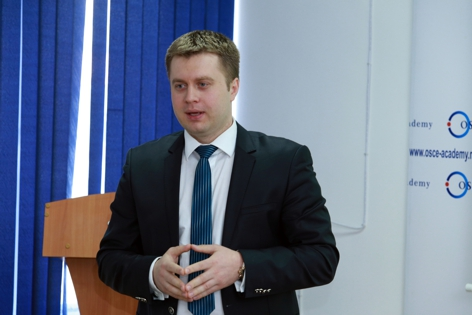