On 10 April 2015 Professor Gregory Gleason from the University of New Mexico in Albuquerque and the George C. Marshall Center in Garmisch-Partenkirchen held a presentation at the OSCE Academy on “The Meaning of the Asian Infrastructure Investment Bank (AIIB)”.

The Bank has been an initiative of the People’s Republic of China and its nearly fifty founding members brought it into effect with effect of 1 April 2015. There are various ways to interpret the project. Among them is the willingness of China to spread its influence in a multilateral framework. The Bank may also be seen as a “counter-project” to the Asian Development Bank which is dominated by Japan.

The speaker argued that it is certainly good that the AIIB is offering an alternative, as such development banking shall not be confined to the World Bank group. China until now successfully avoided to dominate the AIIB. She has deferred veto right that may be found reassuring by other states.

Professor Gleason conceptualized the topic and highlighted the relationship between various efforts in the world markets including the importance of interdependence. China is facing the fact its growth is slowing due to shrinking markets, first and foremost in Europe and the AIIB may well be a means to boost economic development. China’s construction capacity is now significantly under-utilized that makes establishing multilateral infrastructural investment schemes a rational option. As far as financial markets the role of “quantitative easing” in the U.S. and now also in Europe may contribute to the increasing competitiveness of these two economic giants while China has already been the production hub of the world. The huge trade imbalance between China and the two largest economies of the world cannot continue forever.

The presentation was followed by many questions and comments including ones investigating the relationship of China with Central Asian states and whether the AIIB is more of an economic or political project for China. 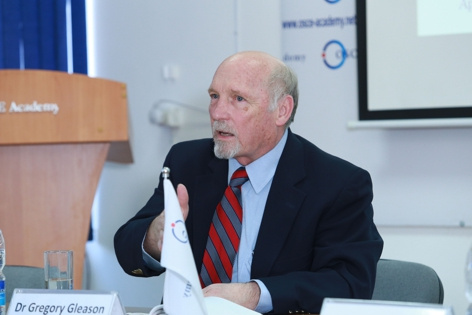