On 28 April, 2015 the OSCE Academy hosted a public lecture by Prof. Maurus Reinkowski from the University of Basel who gave a speech on “Turkish Foreign Policy: from Neo-Ottomanism to New Fragility”.

In the decades that have passed since the reign of Mustafa Kemal Ataturk, who used his political will to lead people away from the Ottoman and Islamic past Turkey has undertaken an unprecedented attempt to import Western culture, to define itself as a European country and enter the EU.
However, even though Turkey has for so long been on the road to Europe, it has never ceased to consolidate its own internal community and identity. This desire is becoming more evident today, among other reasons due to the constant failure of Western countries to accept Turkey as an equal player.
In search for new ways, Turkey is increasingly turning to closer cooperation and enhances bilateral relations with the Islamic world in order to maintain the status quo in the region.

The view that the political course of Turkey has been dictated by neo-Ottomanism and Islamism is gaining popularity. However, the decisive factors of Turkish foreign policy are based on economic needs, historical ties with neighbors and the country’s delicate location.

Speaking of geopolitics it should not be forgotten, that Turkey lies at a crossroads of global interests in energy and security issues specific to the Middle East, the Caucasus, the Balkans and Central Asia. Realizing this strategic importance, Turkey is moving away from the role of a "bridge” to the role of a "creator." Turkey extends its influence mainly by forces and means of the so-called soft power and increasing its political influence by acting as a mediator in violent conflict resolution processes between different countries. Turkey's image has risen in the Arab and Islamic world, after a conflict with Israel, which, paradoxically, has not led to the absolute destruction of the relationship between the two countries. Memorably, Turkey and Israel had a strategic partnership in the 1990s.

The Turkish government when dealing with foreign policy issues consistently focuses up on the most urgent geopolitical challenges, such as energy security and becoming a major transport hub, long-term energy strategies development, the Middle East crisis, the improvement of Turkish-Israeli relations, as well as building partnership with the EU.

Neo-Ottomanism is based on the fact that Turkey is a regional powerhouse.  Its strategic vision and culture reflects the geographic breadth of the Ottoman and Byzantine empires. Therefore, Turkey as a key country is obliged to play a very active diplomatic and political role in the wider region, the centre of which it appears and claims to be.
Q & A session raised a range of topical subjects such as the influence of Turkey on radical Islamic countries, Turkey's attitude to the ISIS, the approach to the Armenian genocide, and others. 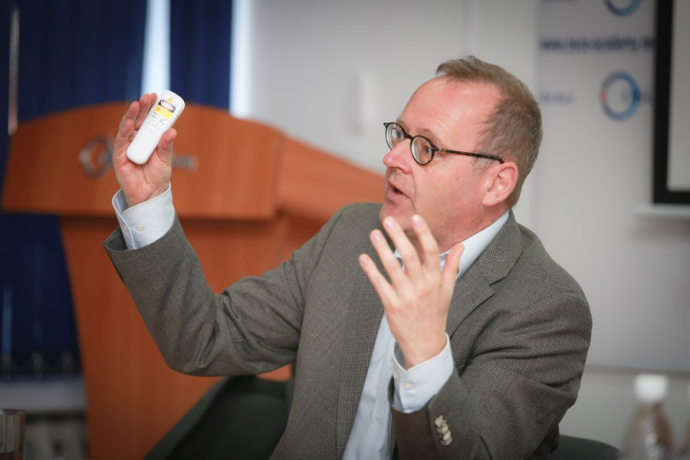