On 29 April the OSCE Academy held a graduation ceremony for the 3rd class of the MA programme in Economic Governance and Development. Sixteen students from each Central Asian state and Afghanistan received their degree certificates, having successfully completed the academic courses, thesis defence and final examinations. The total number of the Academy’s alumni thus reached 308.

The representatives of the OSCE Centre in Bishkek, partner institutions, foreign embassies, the Academy’s alumni, staff, faculty, and the relatives and friends of graduates attended the event. The representatives of the Government of Kyrgyzstan took part as well, with the Minister of Foreign Affairs of the Kyrgyz Republic Mr Erlan Abdyldaev giving a keynote speech to the students.

Addressing the graduates, Minister Abdyldaev congratulated them on graduating from “a unique educational centre of Central Asia”. He stressed that the OSCE Academy is a positive example of cooperation between Kyrgyzstan and the OSCE, and reassured that Kyrgyzstan will continue providing full support to the activities of the Academy.

The Acting Head of the OSCE Centre in Bishkek, Mr John MacGregor offered inspiring and powerful messages to the graduating class, stressing the importance of their commitment to further self-development after the graduation. "If you set a goal, you need to throw all your forces on its achievement," said Mr MacGregor, calling students to maintain enthusiasm, hard work and long-term vision in their further professional development.
The OSCE Academy’s Director Dr Pal Dunay stressed that the OSCE Academy works hard on adjustment of the programmes “to provide students with a training that makes them highly competitive in the labour market”. Speaking of the MA in Economic Governance and Development, Dunay shared good news from the current admissions process, saying that “for the first time ever the number of applicants to MA programmes exceeded one thousand, and the number of applications for the MA in Economic Governance and Development exceeded the MA in Politics and Security. This means that there are no ‘the 1st, and the 2nd’ Master’s programmes, but there are two equally strong pillars of the Academy”.

The official ceremony was followed by an informal part and a reception, with the MA programme rewarding the best students in different nominations:  "Best MA Thesis Award" and the Alumni Stipend from the Alumni Network of the OSCE Academy were received by Aikerim Motukeeva for her work on "Exchange Rate Pass-Through into Domestic Prices in Kazakhstan"and the second award on "Best Field Research" from the OSCE Academy was received by Begimay Abdraeva for "Using Mining as a Driver of the Sustainable Local Economic Development: Case Study of Orlovka Town”. 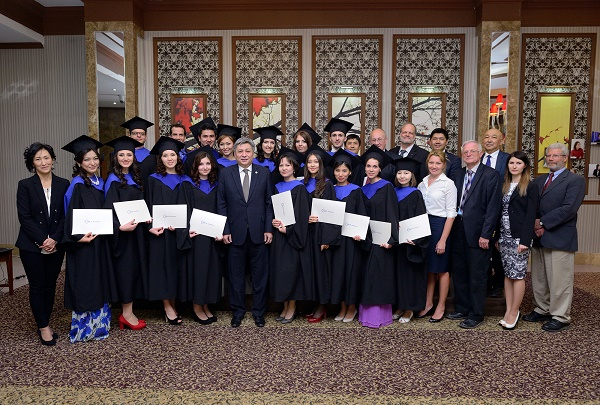