Workshop on Prospects and Challenges of the Eurasian Economic Union

On 11 May 2015 the OSCE Academy together with the University of St. Andrews  hosted a public workshop on “Eurasian Economic Community: Prospects and Challenges”. The event was organized in the framework of the cooperation between two institutions and supported by the Marie Curie Fellowship in “Post-Soviet Tensions”.  The speakers included Mr. John Collis, PhD Candidate at the Institute of Advanced Legal Studies,  School of Advanced Study, University of London; Mr. Medet Tiulegenov, Assistant Professor  and Chair of the International and Comparative Politics Department of American University of Central Asia; and Ms. Selbi  Hanova, Marie Curie Fellow and PhD Candidate at the University of St. Andrews. The event was chaired by Dr. Pal Dunay, Director of the OSCE Academy, who also delivered introductory remarks on the prospects of the EEU.

The workshop contributions focused on the variety of themes related to the Eurasian Economic Union. Dr. Dunay initiated the workshop by delivering a general overview of the EEU stressing on the offers that the new entity might provide to its members and the possible impediments that might arise for its effective functioning.

Analyzing from the broad perspective of the rule of law, Mr. Collis discussed features of the supranational court of the EEU.  He analyzed the functions of the courts system within EEU with reference to the wider legally theoretical definitions.

Mr. Tuilegenov provided the view from Kyrgyzstan on the normative characteristics of this integration-driven project.  His comprehensive overview included various aspects of legal, institutional, socio-economic and political responses in the country that is acceding to join the EEU.

Ms. Hanova, alumna of the OSCE Academy, 2008, looked at the EEU from the regional cooperation/integration perspective and analyzed the ideational characteristics of the new entity.  By looking at the regionalism of the EEU, she also raised questions on the ways in which identity discussions feature in the discourses of the organization.

The participants of the workshop included students of the current MA in Politics and Security class as well as those from the number of universities in Bishkek, representatives of diplomatic, international and academic communities. 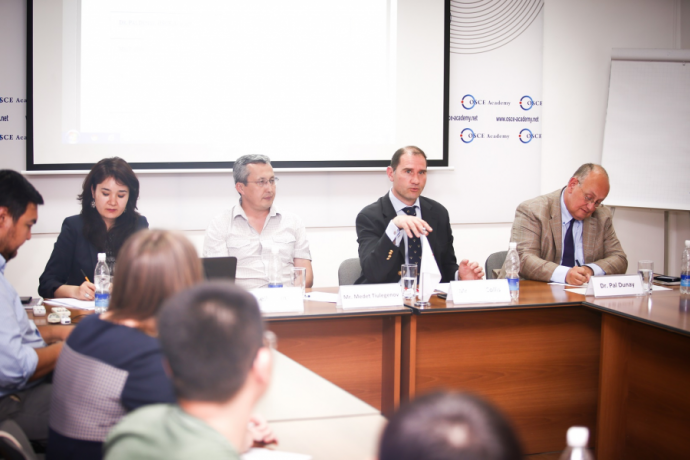