Graduation Ceremony of the MA in Politics and Security Programme

On September 25, 2015 the OSCE Academy has graduated its eleventh class of the MA in Politics and Security programme. The official ceremony was held in the Park Hotel, where twenty three students from all Central Asian countries received their master's degree and joined the alumni network of the OSCE Academy, which already has more than 300 members worldwide.

The ceremony was attended by representatives of the OSCE Centre in Bishkek, partner institutions, foreign embassies, graduates of the Academy, as well as staff, faculty, relatives and friends of graduates. Representatives of Kyrgyz government also took part in the event.

The official part of the ceremony included greeting speeches of the Prime Minister of Kyrgyzstan Mr. Temir Sariev, head of the OSCE Centre in Bishkek and the Chairman of the Board of Trustees of the OSCE Academy, Ambassador Sergey Kapinos and Director of the OSCE Academy Mr. Maxim Ryabkov.
According to the Prime Minister of the Kyrgyz Republic Mr. Sariev, who delivered a welcome speech to the graduates and guests "Kyrgyz government has played and continues to play a key role in the success of the Academy. It strongly supports and creates conditions for its further development. The OSCE Academy is a story of success developing in the Kyrgyz Republic. We will continue to support the Academy and its graduates, I am confident that the new generation of leaders will be able to contribute to the further successful development of the region. "

H.E. Ambassador congratulated graduates with the completion of this difficult academic year and called for future specialists to overcome all the problems and start the hard work for development, security and prosperity of the Central Asian region.

"Watching the professional growth of our graduates, their participation in social and scientific debate, I'm sure that those who left the Academy today, well prepared and motivated to make a huge contribution to the development of the region", - said Dr. Ryabkov, Director of the OSCE Academy.
The official part of the graduation was followed by the informal programme, which graduates prepared for the guests of the ceremony. 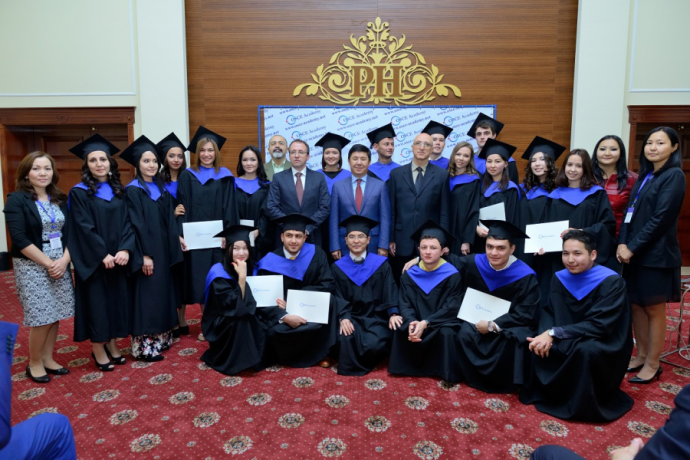