On September 30 the OSCE Academy in cooperation with the Media Policy Institute held a meeting with journalists, media experts and students, dedicated to the International Media Ethics Day (IMED) 2015.
The purpose of the meeting was to mobilize journalists to discuss the most relevant ethnical issues, study thematic researches and take part in discussions, related to various ethical dilemmas that journalists face in their daily work.
In the course of the event, based on materials provided by CIME (Center for International Media Ethics CIME www.cimethics.org), participants were able to discuss such topics as a limitation of freedom of opinion, overcoming restrictions of freedom of speech and censorship, that are important for the region.
The most heated discussion were caused by the question of self-censorship. Many agreed that journalism in the region is nowl  imited to reporting as expressing opinions on political and religious matters became largely unsafe for journalists. Concerned of their personal security, journalists avoid controversial issues or try to soften the tone of materials, which eventually leads to loss of articles relevance.
"It is important to understand that as soon as we resort to self-censorship, we no longer act as journalists. We begin to play with the subject and audience, "said Boris Globus (radio" Retro FM ").
In turn, the communication coordinator of the OSCE Academy, Tatiana Makarova stressed: "While journalists who should play the role of public voice keeps silent, other people often compelled to talk about the problems and to find solutions."
The meeting also addressed the issue of public coverage of important issues, ways of presenting information and differences between incitement and informing.
Head of the National Media Training Centre Ms Adel Laisheva, talking about Charles Ebdo said "It is necessary to avoid the excesses in the coverage of all topics. It is important to think not only about what to say, but how!»
In addition, media expert Marina Kim stressed that "often there are disputes about how to feed this or that information. Why do some journalists write as if they do not have moral principles, and some – not? It should be understood that the journalists  are people too. If a person has no self-censorship and ethical behavior, it will not appear."
Speaking about the causes of self-censorship, director of the Media Policy Institute Ms Begaim Usenova stressed that journalists often refuse to write on certain topics, due to the fact that they are not familiar with the legal field. "Kyrgyz law does not provide criminal liability for the published materials. However, journalists often do not know about it, and are afraid of prosecution and persecution. "
"Professional frame oblige members of the media to comply with journalistic ethics. It is important not confuse the concept of self-censorship and responsibility. Journalist per se should be responsible, but that does not mean that he has to hide or to keep silence about the social significance of the problem," - concluded Gulnura Toralieva 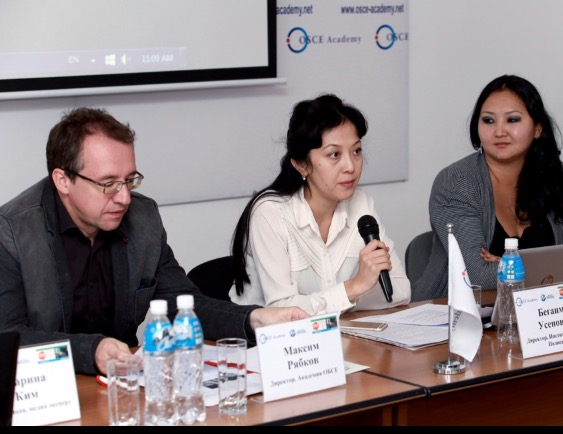