The OSCE Academy in Bishkek is delighted to announce that in the beginning of April two agreements were signed:

1. The Memorandum of Understanding between the Organization for Security and Co-operation in Europe and the Government of the Kyrgyz Republic on further activity of the OSCE Academy in Bishkek was signed by German Foreign Minister Frank-Walter Steinmeier and his Kyrgyz counterpart, H.E. Erlan Abdyldaev. By signing the Memorandum of Understanding the Kyrgyz Republic and the OSCE have recognized the Academy as a unique centre of education, professional training, research and the development of dialogue at the regional and inter-state levels in Central Asia. The agreement will allow the Academy, which has been operational since 2002, to continue educating young professionals in the field of international relations, security, economic development and governance, as well as in empirical research on regional issues, with the aim of strengthening security in the region.

2. The Lease Agreement on the state premise between the Department of State Buildings under the Administrative Board of the President of the Kyrgyz Republic and the OSCE Academy in Bishkek. This agreement allows the Academy to use the building located at 1A, Botanichesky pereulok in Bishkek for the whole period the Memorandum of Understanding between the OSCE and the Government of the Kyrgyz Republic remains in force.

Besides, the Ministry of Justice of the Kyrgyz Republic approved the Charter of the OSCE Academy in Bishkek, which was adopted by the Board of Trustees, and issued a Certificate on state re-registration of the legal entity.

With these steps the future of the OSCE Academy is guaranteed for several years to come. They will be followed by the completion of the licensing and accreditation process of the MA in Politics and Security and the MA in Economic Governance and Development. The OSCE Academy hopes to realize these objectives by the begging of the next academic year. With funding provided for 2016 and efforts made to provide for funding in the years to come the OSCE Academy will stand on solid ground to serve the interests of Central Asia through education, training, dialogue and research in the long run. 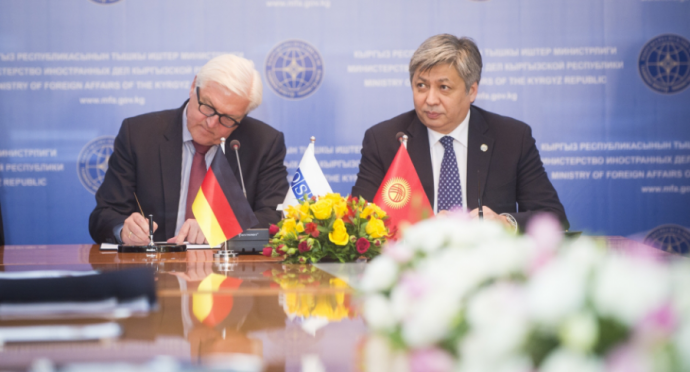