On the 18th of April 2016 Mr Jan Plesinger, Head of the OSCE Documentation Centre in Prague visited the OSCE Academy in Bishkek and held a presentation under the title: "Getting to Know the OSCE as Implementing Partner, Donor, Worker in the Field and Worker in the Secretariat". The speaker graduated from Palacký University in Olomouc, Faculty of Science and was working for the OSCE, the Ministry of Foreign Affairs of the Czech Republic, served at the Embassy to Kosovo, and was deputy head of the OSCE Mission in Moldova before his current assignment.

Mr Jan Plesinger presented OSCE’s structures and institutions to the students of the Academy, also spoke about the high concentration of the OSCE missions in the post-Soviet countries and criticism of it. As he has been working for the OSCE for a long time he shared his experience of serving in the OSCE Secretariat and attempting to solve conflicts as deputy head of the OSCE Mission in Moldova.

The OSCE Documentation Centre in Prague (DCiP) deals with the documentation of OSCE activities, disseminates public information about OSCE and serves as the organization's repository. In co-operation with the OSCE Secretariat, the Centre also provides support to annual meetings of the OSCE Economic and Environmental Forum in Prague – the key event of the OSCE’s work in economic and environmental dimension.

During the lecture Mr Plesinger highlighted that the crisis in Ukraine as well as in Nagorno-Karabakh has huge impact to the OSCE’s missions and amount of work increased recently. “The only way to terminate hostility is a peacekeeping mission which can be under the umbrella of OSCE or someone else but not through armed forces” – said the speaker.

Mr Plesinger replied to a question of the Academy’s student about potential engagement of the OSCE in the Afghan process and said that the OSCE cooperates with the Afghan government, has some presence in Kabul. However, the OSCE is not going to involve more deeply as Afghanistan is a cooperation partner but not an OSCE participating state.

During the Q&A session Mr Jan Plesinger also explained the public distribution of internal OSCE documents and also in Documentation Centre in Prague. 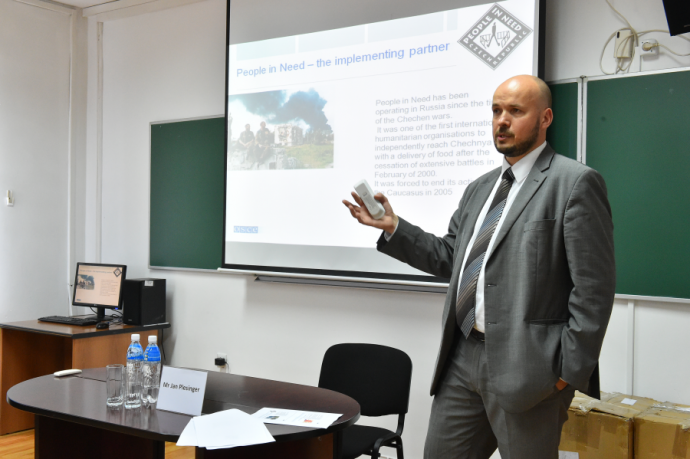