“We have to get up, stand up and fight for our stability” – Ms Muttonen about the security challenges

During opening of the session, Ms Muttonen noted that the OSCE is sincerely committed to protect its participating states and to improve peace, security and prosperity in the region. Speaking about the work and efforts of the OSCE in the Central Asian region, Ms Muttonen mentioned the positive role that OSCE played as a mediator during the ethnic clashes in Kyrgyzstan in 2010.

“Conflicts nowadays are more often intrastate than interstate, so the work of the OSCE is more focusing on the former. Conflicts also happen on borders as spill-overs of civil wars, insurgencies and terrorism where civil society is a victim” – said Ms Muttonen. In this regard, the OSCE assists government institutions, people, and communities in conflict prevention, crisis management, post-conflict, rehabilitation and reconciliation. She added that the “civil society” plays important role in the peacebuilding and peacekeeping processes and the OSCE is working closely with them.

“Peacebuilding and peacekeeping without women is not possible” – said Ms Muttonen about promotion of women participation and involvement in security politics. “Track II diplomacy” was identified as another crucial method in the conflict prevention and peacekeeping processes. The OSCE regularly organizes “security days” with all actors involved in order to build interpersonal dialogues and exchange of views. 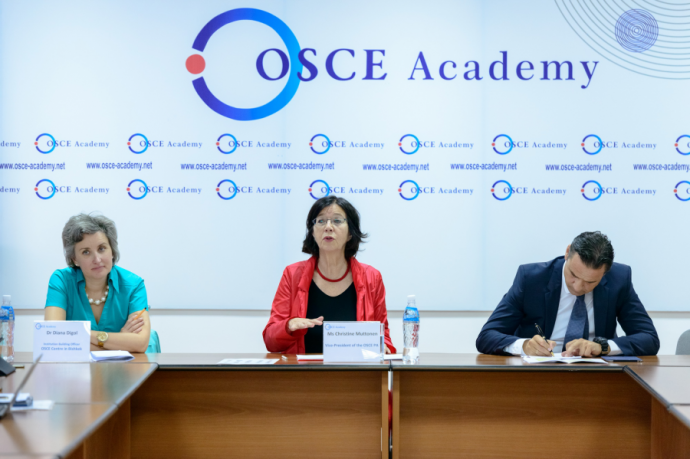