How it all began?

I come from Austevoll, an island community off the west coast of Norway, where we had a boat and went fishing or swimming. I am still very close friends with the girls of my age growing up on the same street. One of them visited me in Tajikistan and Kyrgyzstan during my year at the Academy. I grew up on the island, but started to travel early as much as possible, and when I was 16 I left to go to high school in Wales. Since then I have lived in many different places.

In Norway you learn English early in school, and later I learned German. But I always wanted to learn a more “exciting” language, and chose Russian – not to study the use of commas or participles, but to talk to people and travel. So I always combined work experience, education, language and travel. After my bachelor’s degree in Russian and Human Rights, with internship in a Russian NGO, I wanted to work for an organization in the South Caucasus, and joined a one year exchange programme with the Armenian Red Cross. Finalizing the year in Yerevan I was looking for somewhere in Central Asia to do my Master’s, learn more Russian and understand Central Asia better.

So when I found the OSCE Academy on internet it was perfect: located in Kyrgyzstan with fellow students from other Central Asian countries, most of the classes in English with some in Russian, focus on human rights, civil society and international relations, and a so-called Western methodology. I understood from the beginning that this was more of a field-based degree than an academic one, and that was exactly what I was looking for – not sitting in Oslo or London and reading about nation building and democratization in Central Asia, but being there and talking to the people who are experiencing it. What’s there not to like? I am very happy with my choice and the excellent people that I met, many of whom are still my close friends.

Life at the Academy

The Academy was very interesting for me, both the classes and the people. One of my first surprises was all the talk about China. In Norway, China is (at least was) considered an economic power, but not too high on the agenda. That changed soon, and it was very useful to see the world from the Central Asian perspective. I also enjoyed discussing democracy, civil society, women’s rights, respect for differences etc. with my fellow students. I also winced together with them when Europeans came to the Academy and mixed Uzbek nationality with Uzbekistani citizenship, or after criticising so-called Eastern values, managed to say “maybe I shouldn’t use that term here” when asked to elaborate. I took any opportunity to travel in Kyrgyzstan or in Central Asia, and chose to do my internship and researching the thesis in Tajikistan. I grew more and more fond of the scenery, the people, the experiences, though I have to admit it is a love-hate relationship at times.

In Norway everything most of the time goes according to plan, you can trust people and the state, and people follow the rules because they know it is for their own benefit, not in order to avoid paying bribes, like driving with a seat belt. So I had plenty of pleasant experiences but also experienced more closely the poverty, the corruption, the injustice, the lack of trust in authorities and the way people tried to deal with it, for example through the November 2006 protests. So I became even more intent that I wanted to do what I could to assist those activists in the region who were fighting for justice and democracy, and also to tell everyone I could to come visit Kyrgyzstan and the region to experience the scenery, the people and the food (except kurut..).

As I already mentioned briefly, I always wanted to combine practice in the field, knowledge of language, culture and living, with work experience, theory and education. In that way you are much better suited to do good things rather than just reading, not knowing how it is for regular people and risking mistakes. The experience from the Academy was perfect in this regard: work in the field of human rights, using Russian language, and my knowledge of the region to the best of most people.

When it was time to write the thesis at the Academy and find an internship, I was intent to do that in another country in Central Asia, and the choice fell on Tajikistan. There, I had my internship in the International Organisation for Migration. They had just had a Training of Trainers course on hiv/aids prevention directed at wives of labour migrants, and I wanted to write something about women’s rights in Tajikistan, so it was a good combination. My research was directed at wives of labour migrants and their financial and social situation while husbands were away, and their health situation when the husbands returned. I was researching to what extent they were implementing the skills and knowledge they learned during the ToT to protect themselves from infection, and how the migration situation influenced gender roles. I got to talk to women all over the country, so it was a very interesting research, also for IOM, as it turned out the women did not implement the knowledge they had obtained… I did several presentations about it in Tajikistan and was repeatedly told how I was the first one to ever explain properly what “gender” means.

After graduation I was back in Armenia and worked for the Norwegian Helsinki Committee and the ODIHR in connection with the disputed presidential elections and subsequent protests in 2008. I had a short period working with asylum claims from Central Asians in the Norwegian Immigration Appeals Board, before I got the offer I was waiting for; project manager for civil society programmes in Armenia and Central Asia with the Norwegian Helsinki Committee. So the Academy and Central Asia experience was very useful for my work, and since my fellow students and friends also had good jobs in the field later, I got to meet them on various occasions.

Now I am head of the Russia Department in the NHC, so unfortunately I do not get to travel to Central Asia as much as I did, but since there is more interest for Russia than Central Asia in Norway I do grab every opportunity to include Central Asian activists, topics, research, points of view, the Academy, where possible. We have an intern from the Academy every year here in the NHC.

I am not sure about my future plans, it would be great if I would be out of job and there were no more dictators, poverty or human rights violations in Central Asia, the South Caucasus and Russia, but I am afraid that there is still much work to do in all the countries. So I plan to continue to do my work together with those who want to improve the situation for all inhabitants of their countries. I will advertise the South Caucasus and Central Asia as very interesting travel destinations where I can, and I will continue to remind everyone that these countries are so much more than their repressive authorities. On a personal, note I hope I will be able to have an equally interesting and rewarding job but also be able to move back to the west coast of Norway, the beautiful city of Bergen, to be closer to family, the sea and the mountains, and host my Central Asian friends there. 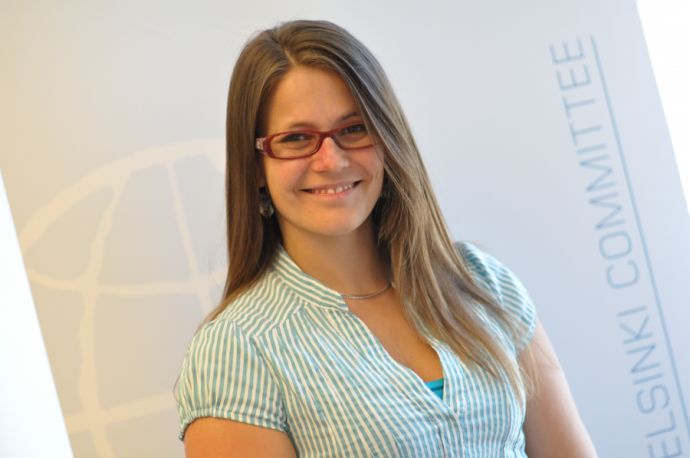