On 5 April, the OSCE Academy in Bishkek was honored to welcome H.E. Ambassador Dr Gerhard Sailler, Ambassador of Austria to Kazakhstan, Kyrgyzstan, Tajikistan and Turkmenistan to give a guest lecture to students of both MA programmes. Following the short introduction by the Director of the OSCE Academy Dr Alexander Wolters, Ambassador Sailler shared his thoughts and ideas on Modern Network Diplomacy, reflecting on the evolution of diplomacy and providing students with basic definitions and concepts.

Dr Sailler began his lecture with emphasizing the traditional role of diplomats in representing the state and to lead negotiations in its interest while maintaining good and friendly relations with other states and non-state actors. Modern time diplomacy, he continued, features incomparably more actors, most importantly civil society as the new agenda-setter. Such multiplication of actors, among other developments, forces diplomacy to employ a more proactive form of communication. Dr Sailler further discussed the power, and the advantages and shortcomings of soft diplomacy and the rise of new ICT. The latter, he expounded,   has resulted in what is referred to as “Twiplomacy” and “hashtag diplomacy”. These are now increasingly popular tools to attract attention to particular social issues, to connect and promote and to communicate with the public.
The lecture was followed by a short Q&A session with students interested in the prerequisites to become a good diplomat and corresponding training courses.

Dr Gerhard Sailler is Ambassador Extraordinary and Plenipotentiary of the Republic of Austria to Kazakhstan, Kyrgyzstan, Tajikistan and Turkmenistan. Previously he worked as Deputy Director at the Diplomatic Academy of Vienna. Dr Sailler studied History and International Relations in Graz, Rouen, Braga and at the SAIS Europe in Bologna. 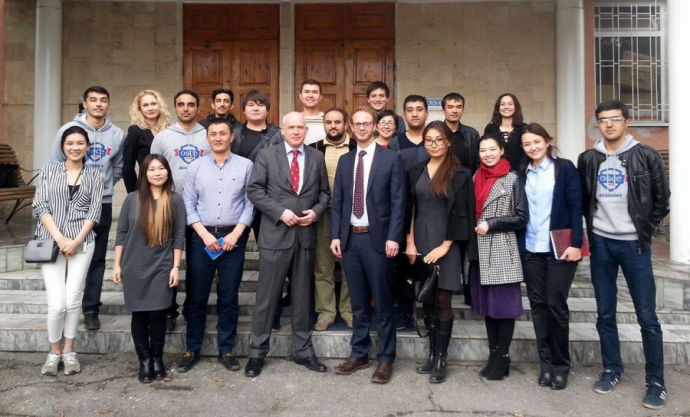