On June 13, 2017 H.E. Lamberto Zannier, OSCE Secretary General, paid a visit to the OSCE Academy in Bishkek within the framework of his official visit to Kyrgyzstan. His meeting with students was introduced by Director Dr. Wolters, who used the chance to express his sincere gratitude for the strong and continuous support from Ambassador Zannier to the OSCE Academy since its establishment. Taking the floor Ambassador Zannier referred to his long-term involvement with the Academy considering the institute a most successful and needed project. He reminded the audience of the fact that he used to serve as the Head of Academy’s Board of Trustees in the institute’s early years.

In his lecture Ambassador Zannier provided with his view on the geopolitical shifts in recent times and compared these shifts with the historical evolution of the environment in which the OSCE had been developing from conference to fully institutionalized  organization. He further touched upon the immediate challenges of the OSCE in the region, most importantly the conflict in Ukraine, but also the developments in Central Asia and the negotiations concerning the mandates of the mission in Kyrgyzstan and Tajikistan.  Concluding his presentation the Secretary General pointed out the increased use of Cold War rhetoric in the OSCE space and the many challenges connected to this trend and the few opportunities it could offer for the organization. He expressed his hopes for the OSCE to move forward and develop new means to engage the worrisome crises in the region.

His frank and open talk was very well received by students and followed by a lively Q&A session with questions covering the ongoing hybrid war in Ukraine, the OSCE monitoring mission placed in the conflict zone, Afghanistan and the future of OSCE Central Asia relations as well as the future development of the OSCE Academy itself. H.E. Lamberto Zannier again expressed his strong support for the institution and wished the Academy the expansion of its activities.

We cordially thank Secretary General Lamberto Zannier for his visit!


Ambassador Lamberto Zannier OSCE Secretary General since 2011.
Zannier joined the Italian Foreign Ministry as a career diplomat in 1978. From June 2008 to June 2011 he was UN Special Representative for Kosovo and Head of the United Nations Interim Administration Mission in Kosovo (UNMIK). Previously, he served in Rome, Abu Dhabi and Vienna, mainly specializing in multilateral and security affairs.

He has been a member of the Board of Trustees of the OSCE Academy in Bishkek, the Advisory Board of the Geneva Centre for the Democratic Control of Armed Forces (DCAF) and the EU ISS Board of Directors. He is currently President of the Centre for International Negotiation and Mediation of the University of Gorizia, Italy.

Zannier holds a law degree and an honorary degree in International and Diplomatic Sciences from the University of Trieste, Italy. (http://www.osce.org/sg) 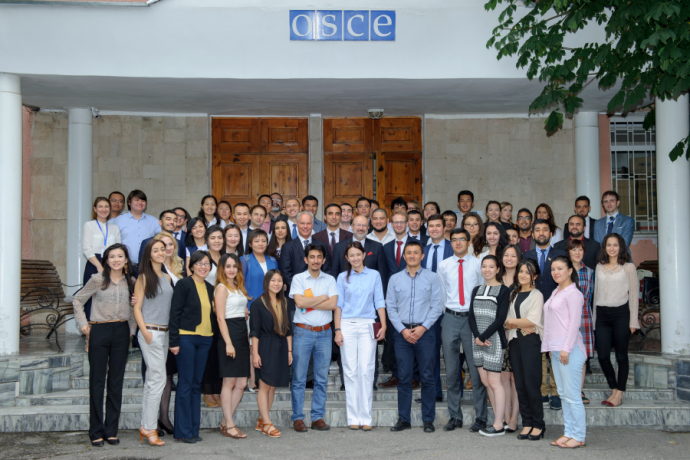