On 16 December 52 students of the MA Programme in Politics and Security and MA Programme in Economic Governance and Development graduated from the OSCE Academy in Bishkek.

The representatives of the OSCE Programme Office in Bishkek, members of the Diplomatic Corps, partners and donors as well as parents and friends of the graduates attended the Ceremony.

The Director of the Academy, Dr Alexander Wolters welcomed distinguished guests and congratulated graduates with the successful completion of their studies. During the opening speech, Dr Wolters also expressed the Academy’s sincere gratitude to trustees, partners and donors for their advocacy, guidance and continuing support.

Following the Director’s speech, Head of the OSCE Programme Office in Bishkek, Ambassador Dr Pierre Von Arx addressed the graduating students: “The young people, whom we are celebrating today, have worked extraordinarily hard as they prepare to embark on the next chapter in their life. […] In this new chapter of your lives, the Academy no longer has the lead role. However, in the background, it will always be there.”

Dr Indra Overland from the Norwegian Institute of International Affairs (NUPI), the OSCE Academy’s Donor and Partner Institution, also congratulated students via the video message: “Anyone who is able to complete a Master’s Degree at the OSCE Academy is a good student and has a potential to do something important in life.”  Dr Overland also welcomed students to the OSCE Academy Alumni Network and wished graduates to work jointly on making the region great again.

After the welcoming speeches, Ambassador Dr Pierre Von Arx handed over the Diplomas to the graduates. The programme continued with the speeches from the Faculty and students and the announcements of nominees for Best Thesis Awards and Top GPA Awards. Nominees received certificates and prizes for their outstanding academic achievements. The graduates have become “Lifetime members” of the alumni network. As of December 2017, the total number of the OSCE Academy alumni has thus reached 427. 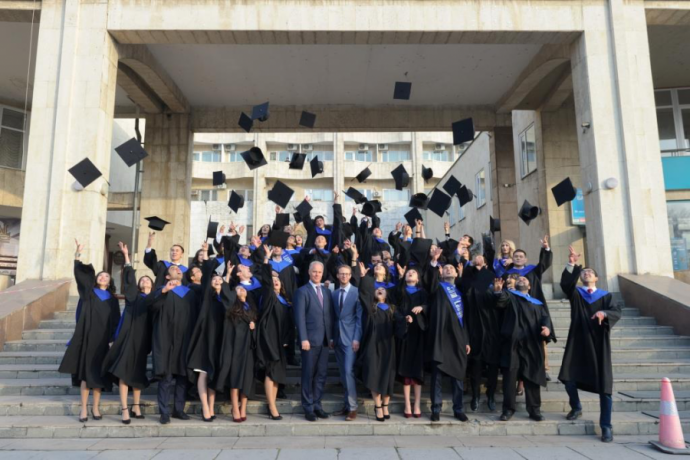