I was born in Kadamjay, one of the remotest corners in Fergana valley that inherited post-Soviet complex of border, enclaves and inter-ethnic problems between three Central Asian states, Tajikistan, Uzbekistan and Kyrgyzstan.
While being a student of Osh State University, I took part at the very first OSCE Central Asian Youth Network (CAYN) in Uzbekistan. Together with my peers from other Central Asian countries, I took part in a research seminar on regional problems.

Afterwards, I joined the Agency for Technical Cooperation and Development (ACTED) to conduct research and gather data to identify potential sources of tension and conflict in cross-border communities of the three southern Jalal-Abad, Osh and Batken oblasts of Kyrgyzstan. To sum up, my personal experience of living close to border and research on border disputes on grass-roots level made me search for possible resolution of tense situation in Fergana valley. My MA in Politics at the OSCE Academy in Bishkek offered me the resolution.

I liked challenging atmosphere at the OSCE Academy with teaching staff from Europe, Australia, Russia and Kyrgyzstan. I found conflict resolution course and transcendence approach taught by Austrian peace mediators and practitioners Gudrun Krammer and Wilfred Graf very insightful in terms of finding efficient ways in addressing cross-border and inter-ethnic disputes. Another inspirational course at the OSCE Academy, Human Rights in non-European world taught by Dr. Scott Newton from School of Oriental and African Studies in London that gave insights into modern inequality and discourse on priority of political rights vs. economic rights. And of course, many thanks to Dr. Tim Epkenhans for sharing his brilliant systematic knowledge that helped me understanding global and regional phenomena in Political Islam. And finally, I also need to mention the course in history of Central Asia where we discussed the difficult process of national territorial delimitation "razmezhevanie" in Central Asia 1920s by the central Soviet government in Moscow and its impact on creation of enclaves and ethnic composition of the southern parts of Kyrgyzstan.

Apart from studies, it was nice to live in Bishkek(the city named Frunze in Soviet times) where my parents studied back in 1960s at the Polytechnical Institute and Medical Academy; both of which are located close to the Botanichesky Pereulok and to walk the same streets my parents walked so many years ago. With the only difference that maybe my parents did not feel how fragmented Kyrgyzstani society along regional (north-south dichotomy), ethnic, clan, tribal lines as I felt myself when I lived in the capital of independent Kyrgyzstan in 2006-2007. Often political opposition protests against second president Bakiev's government happened in Bishkek and there were discussion topics at our classes with Dr. Vanessa Ruget which focused on "failed states" theory that helped me better understand society of Kyrgyzstan.

I am proud that I am a graduate of OSCE Academy because it is a unique chance to explore the Central Asian region through friendships, networks and internships. I was lucky to explore Turkmenistan, almost exotic and closed country due to its geographical and political distance to other Central Asian countries. I was invited by the OSCE Center in Ashgabat to participate in its internship programme in summer of 2007. It was a great opportunity not only to learn about OSCE field activities but also to see the beauty of Karakum desert, Caspian sea, Amudarya river and the modern architecture of Ashgabat.

The most important treasure that I received through OSCE Academy is friends from all over Central Asia and beyond with many of whom I have been keeping in touch during 10 years after graduation through reunions in Bishkek and Vienna.

My post-Academy period is connected with Vienna. After graduation I was invited by the OSCE Parliamentary Assembly (OSCE PA) to work as a Research Fellow in its Vienna Liaison Office. The OSCE PA is one of the institutions of the OSCE headquartered in Copenhagen. This Fellowship was a great school for multi-lateral diplomacy and parliamentarian cooperation. It is often referred as "the fourth parliamentarian dimension" of the OSCE. The OSCE PA Office in Vienna represents Parliamentary Assembly at the Permanent Council, Forum for Security and Cooperation, Committee on Environmental and Economic Affairs, Human Dimension Meetings, Advisory Committee on Management and Finance, meetings with Asian and Mediterranean partners for Cooperation and other OSCE interests that takes place in Hofburg. I encourage all OSCE Academy students to apply for the Research Fellowship of the OSCE PA. I would like to thank OSCE PA staff in Copenhagen and Vienna for this unique opportunity to work and learn about parliamentary dimension of the OSCE.

Currently, I work at the Vienna International Centre based Comprehensive Nuclear Tests Ban Treaty Organization (CTBTO) which mission is to eliminate nuclear tests around the world through implementation of its global verification network of seismic, infrasound, acoustic and radio nuclear stations. The CTBTO is the leader in nuclear non-proliferation and global security. Working in international environment with colleagues from all over the world, I attend various cultural events in the VIC.  Also, I want to establish Central Asian club in Vienna International Centre.

Living in Austria, I developed new interests and made personal achievements like learning to bike.

I like Vienna because it is a mix of an international city with the cultural touch of the Habsburg Empire. It is also a city with great musical tradition. However, living in Austria I understood that integration into Austrian society is difficult and in order to understand the Austrian culture I took German and Transcultural Communication courses at the University of Vienna. I also found my family in Austria and I raise multi-lingual children. Living abroad I understood that it is very important to integrate but not assimilate. I also feel important to transmit to my children my Central Asian cultural code. My son Ermek Georg attends Sunday Kyrgyz language courses, organized by the Kyrgyz diaspora.
Culturally, Austrians are very formal in address and like acknowledgement titles such academic titles Dr. and Mag.  Another cultural feature different from this part of the world I come from is that Austrian women automatically change their last names after marriage and take their husband's last names. In my culture women keep their family names after marriage.

Living abroad, I understood a lot about Central Asia and started to value Central Asian culture. 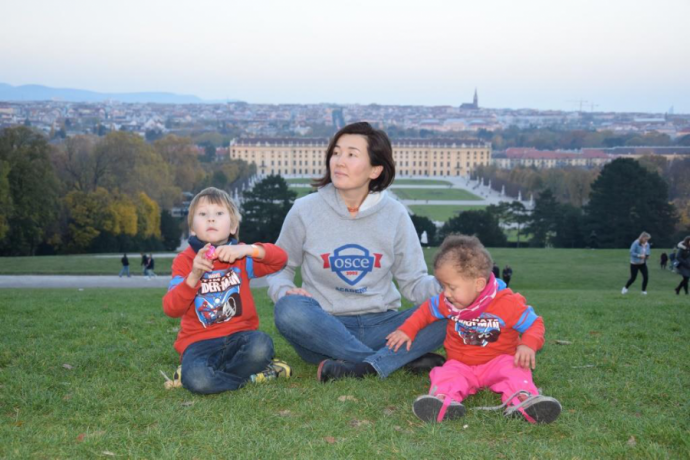