Providing a Chance for Better Future

Anahita Saymidinova is alumna of 2012, MA Programme in Politics and Security from Tajikistan. Anahita helped to rescue 167 people from Afghanistan via the Tajik-Afghan border while Taliban forces took control of Afghanistan’s capital city Kabul in summer 2021. Below Anahita shares with us her unique experience:

On 30 August 2021 I got a phone call from the Israeli humanitarian NGO, the IsraAID. Yotam Polizer, the CEO asked me to support their secret evacuation operation from Afghanistan. They had a list of more than hundred vulnerable people mostly women and girls and their families. But the situation was intense as these people were at risk. We had to act immediately. And I joined them without any doubts.
On 2 September, with a lot of behind-the-scenes talks with high-level officials of Tajikistan, we managed to open the border and to rescue 41 people mostly girls and a 4 months old baby. Most of them were cyclists from Afghanistan. I welcomed them at the bridge. One of these girls was so young and so scared. When she cried, I hugged and told her: “now this nightmare is over”. We travelled to Abu Dhabi and they were placed at the special so-called Humanitarian City. When their papers are ready, they will travel to Canada as a final destination.
We had harder time with the second group. The Taliban didn’t allow them to cross the Tajik-Afghan border. However, we managed to order an airplane from Mazari Sharif to Dushanbe. Policewomen, female judges, journalist and activists were among the 125 people. The government of Albania has agreed to receive them before they will go to the US or Canada.
I feel sorry for all these people who experienced such a huge trauma. It will have a long-term effect on their lives. But this successful rescue mission makes me happy because we gave them new hope to find a safe homeland. 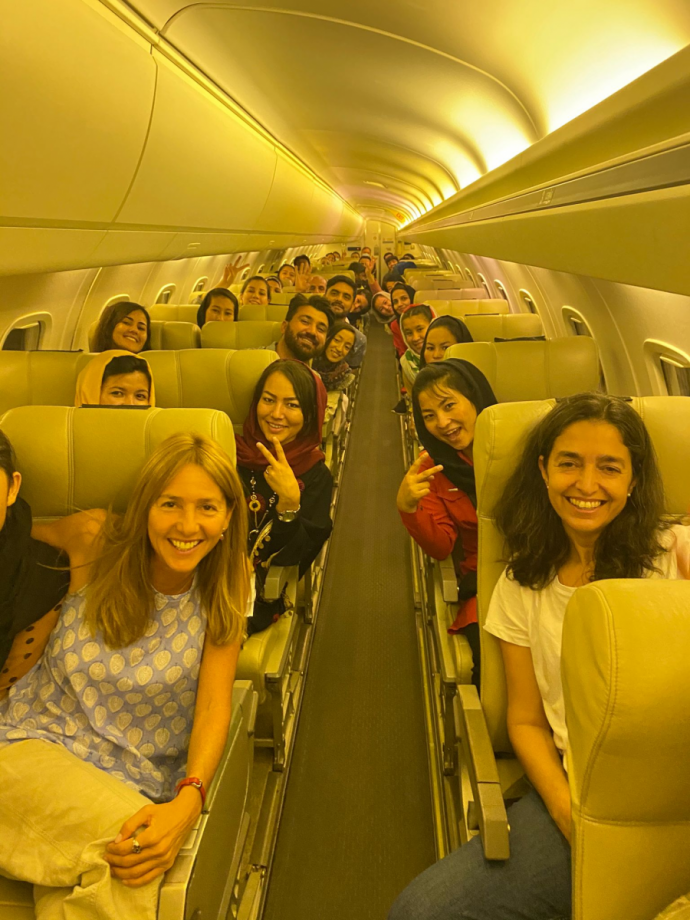