Experts Panel on Ukraine Crisis and Its Repercussions

On 4 December 2014 two prominent experts spoke at the OSCE Academy on the Ukraine crisis and its potential longer-term repercussions. Dr Anna Matveeva is an expert at King’s College London and Professor Graeme P. Herd is the Director of the School of Government of Plymouth University.

Dr Matveeva recently spent three months in Ukraine dealing with the potential of regional recovery. According to her, Ukraine is facing an identity conflict that goes back to the Orange revolution of 2004. During the early 2014 events on the Maidan the authorities in Kyiv did not contest the opposition to those events  in Donbass . However, while the patriotic discourse dominates Ukrainian politics, both pro-western and pro-Russian identities are present in every region of the country. Ukraine develops a new identity that contains elements of an anti-Russian attitude and pro-Europe idealism.

Ukraine is under the impression that the military conflict in Donbass is winnable. However, the Russian Federation has been forced into an awkward situation. Moscow cannot let those people who fight in the Donbass  militarily defeated, humiliated and pushed out. On the one hand, Russia provides strategic support to the rebels, on the  other, she is keeping contacts with friendly oligarchs, including President Poroshenko.

After the late October 2014 elections to the Narodna Rada it is surprising that it was impossible to build a stronger coalition and an alternative power base has been apparently built to put President Poroshenko under pressure. This results in some unpredictability and a complicated power structure.
According to Professor Herd, Russia sees a world where the rules created after World War 2 are no longer applicable. There is a strategic divorce between Russia and the West with no agreement about the threat. Russia does not accept exceptionalism and the privileged status of one state. This is complemented by the Russian leadership’s conviction that the Russian Federation is on the right side of history. Russia’s leadership is moving from a legal-rational legitimation to a historical and charismatic legitimacy.

If NATO’s deligitimization would have been successful, the European status of the U.S. would have been questioned. However, the current conflict shows in the opposite direction and the U.S. – European allied relations are stronger than ever. It presents a dilemma that if Russia would return to the NATO-Russia Council and some ranking generals would visit Brussels it could have a paradoxical effect as speaking about an anti-Russian NATO that supports putchist forces in Ukraine would create further consensus in the west.

It is interesting to see that while Kazakhstan stands out as a country that solved the problem of multiple identities and where everybody has its place, in  Ukraine there was no need for this. As of now, it seems, Russia has certainly lost a large part of Ukraine mentally and the sympathy of many Ukrainians.

In the following rich discussion it was contested that Russia lost Ukraine as a partner and it was also pointed out that the Eurasian Economic Union could not be regarded a geopolitical project. Several questions addressed the potential repercussions of the current tension on Central Asia, including the consequences for ethnic relations. 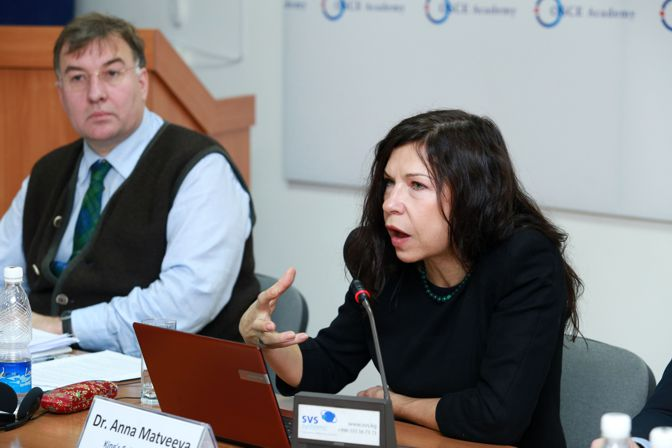