On the 12th of July Ms. Karoliina Rajala, Associate Research Fellow of the OSCE Academy, gave a talk about the Russian military-industrial complex and its prospects for future development. This presentation aimed to provide an overview of the current state and workings of the Russian military-industrial complex by examining some of its recent successes as well as prevailing key issues. Ms. Rajala presented the historic development of the defense industry from the Soviet times until today and highlighted how the defense industry has served as a forerunner of the country’s innovation activity. Even today the Russian political elite sees it as a locomotive for economics, politics and society. Ms. Rajala also discussed the decision-making procedures of the military-industrial complex as well as the structure of its R&D system, and gave insight on the key strategies that are being used today to guide the activities of the defense industry. During the Q&A session the audience was interested to hear about the procedure of disarmament of Russia, in particular of the old systems; the role of the language in the military cooperation between Russia,  Central Asian countries and China, and the present-day export activities of the Russian defense industry.

The video recording of the full lecture is available on our You Tube channel at: https://www.youtube.com/watch?v=UfQOGwk4hE0

Bio: Karoliina Rajala is an Associate Research Fellow at the OSCE Academy and an independent researcher. She also works as a freelance journalist, writing primarily on the EU, Russia and Central Asia, and heads the webzine of JEF-Finland. Karoliina has obtained a BSc degree in Economics and Business Administration from the Turku School of Economics where she is currently enrolled in a MSc program in the same subject area. As a part of her degree, she is completing specialization studies at the Master’s School in Russian and Eastern European Studies at the Aleksanteri Institute. Previously Karoliina has worked as a research assistant at the Ministry of Defence of Finland and accumulated experience from the European External Action Service, two missions of the Ministry for Foreign Affairs of Finland as well as Carnegie Europe. Karoliina’s research interests focus primarily on the Russian military industry as well as environmental cooperation in Russia. 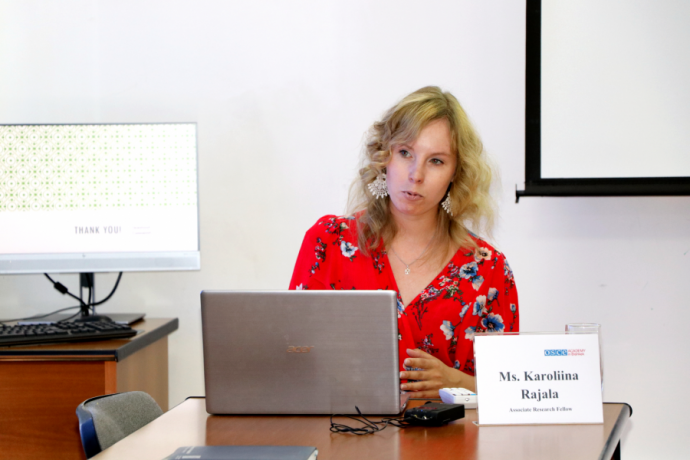