On 7-8 September 2019, the OSCE Academy in Bishkek welcomed over 100 alumni of its MA Programmes from Kazakhstan, Kyrgyzstan, Tajikistan, Turkmenistan and Uzbekistan, as well as from the countries across the region, including Afghanistan, Russia, Macedonia and Georgia, for the 4th Alumni Reunion.

The Director of the Academy, Dr. Alexander Wolters, the Head of the OSCE Programme Office in Bishkek, Ambassador Dr. Pierre von Arx, the Senior Advisor, Section for Russia, Eurasia and Regional Cooperation of the Norwegian MFA, Ms. Merete Wilhelmsen, and Senior Researcher of the Academy's long-time partner, the Norwegian Institute of International Affairs (NUPI), Dr. Helge Blakkisrud opened the event.

“All of you add to the vibrancy and cultural diversity of the OSCE Academy community and help build international links. This is not just important for educational or academic reasons. When our students share the same curricula and strive for common qualifications, we build invaluable links between our younger generations that will continue to enrich and strengthen the relations between the countries of the region and contribute to the lasting co-operation for years to come,”- highlighted Ambassador von Arx in his address to alumni.

Following the opening speeches, current and former management representatives of the Academy discussed the current state of regional connectivity, the importance of the OSCE Academy in this regard, as well as the role of graduates in this process in the future.

The second part of the opening of the Reunion was dedicated to the achievements of the Academy’s alumni. Four graduates of the Academy – Ms. Nuria Kutnaeva, alumna of 2005, and today Director of the “Center for Electronic Interaction” under the State Committee for Information Technologies and Communications of the Kyrgyz Republic; Mr. Zahidullah Jalali, alumnus of 2009, today Director General of Specialized Bodies of the South Asian Association for Regional Co-operation (SAARC) Arbitration Council from Afghanistan; Mr. Rashid Gabdulhakov, alumnus of 2013, PhD Candidate at the Erasmus University Rotterdam from Uzbekistan; and Ms. Nargiza Zhakypova, alumna of 2014, Co-Founder of Educational Centers IT-RUN in Kyrgyzstan, delivered inspirational speeches about their way of achieving success, the role of the Academy in their professional lives, and offered advice to fresh graduates and newly enrolled students.

In the afternoon, the participants of the Alumni Reunion had a chance to return back to the times of their studies and attended five simultaneous workshops on different topics in the classrooms of the OSCE Academy. The sessions, led by experts from the Academy’s partner institutions, covered a wide range of topics, including from Research Publishing and Promoting, and Policy Applied Research on Human Rights and Democracy, to Project Management, and to Preventing Violent Extremism and Counter-Terrorism in Central Asia and finally Digital Economy.

The first day of the Reunion was concluded by a formal reception that was attended by the representatives of the Government of the Kyrgyz Republic, the Diplomatic Corps based in Bishkek, the Heads of several Universities and partner institution of the OSCE Academy.

Dr. Wolters welcomed the alumni and the distinguished guests and highlighted that “the achievements of the Academy are the result of the joint efforts of the Academy, the OSCE Programme Office in Bishkek, the Kyrgyz Government, and of the many donors, especially NUPI and the Norwegian Ministry of Foreign Affairs.”

Following the speeches, Dr. Wolters announced the winner of the Alumnus/a of the Year 2019 Award, who collected more votes among total of seven nominees – Ms. Nargiza Zhakypova, alumni of 2014. She received the recognition of alumni for her contribution to the development of the IT sector in Kyrgyzstan and beyond, aiming to provide Kyrgyz citizens with the access to specialized education in the IT sphere and to receive better-paid jobs. This should contribute to decreasing the number of low-skilled labour migrants and improving and raising the level of economic development in Kyrgyzstan.

During the second day of the Alumni Reunion graduates, students and the staff of the OSCE Academy travelled to the mountains for teambuilding activities and networking. On the way to the venue, alumni participated in the #trashtagchallenge and collected garbage along the road near one of the mountain resorts. During the teambuilding activities at eco-resort Kara-Bulak, graduates had a chance to connect with each other, extend their network and thus enhancing the relevance of the Academy’s Alumni Network. 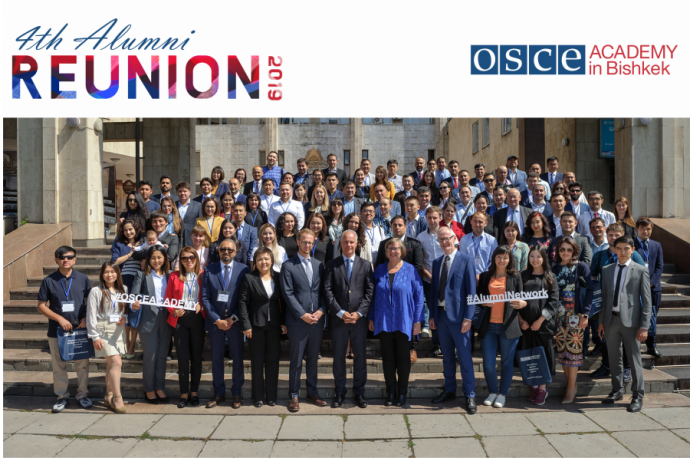