On October 5, 2016 the OSCE Academy in Bishkek opened a conference focusing on the post-communist states and their social, economic and political trajectories in the past quarter century. The main aim of the Conference is to generate informed scholarly discussions on the lessons learnt since the collapse of communism and the Soviet Union and its positive and negative outcomes for the populations of a diverse and large region of the world.

During the opening speech, acting Director of the Academy Ms Indira Satarkulova cordially welcomed participants and highlighted the importance of sharing and developing of new knowledge and experience. Mr Dumitru Minzarari also delivered welcome remarks on behalf of the OSCE Centre in Bishkek. The OSCE Academy in Bishkek expresses its sincere gratitude to the Norwegian Institute of International Affairs (NUPI) and OSCE Centre in Bishkek for their continuous support and cooperation.

Over 50 researchers, academics, doctoral students and practitioners from over a dozen countries will participate in the 4-day event ending on 8th of October. The conference kicked off with an Expert Panel titled “Post-Communist Transitions, Democracy, Human Rights and Social Justice” composed of Dr Alisher Khamidov of New Castle University in the UK, Steve Swerdlow of Human Rights Watch, Anna Chernova of Oxfam Great Britain, Dr Kamoludin Abdullaev of Tajik-Slavonic University and Olivier Ferrando of Science Po in Paris.

The conference will continue tomorrow with a keynote speech by Dr Gregory Gleason of the George C. Marshall European Center for Security Studies in Germany, in addition to 12 additional panels throughout the week on a variety of relevant topics to the theme of post-communist transitions. The best submitted papers will be published in the Academy's policy brief series and other foreign journals. 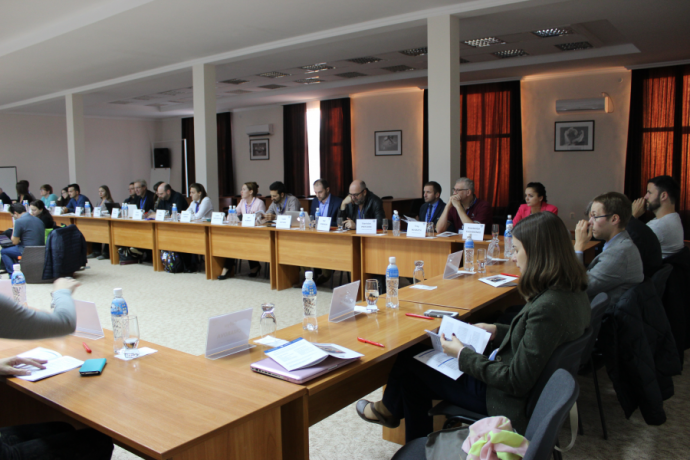