On 13 December 46 students of the MA Programmes in Politics & Security and in Economic Governance & Development received their degrees and graduated from the OSCE Academy in Bishkek. Dr. Alexander Wolters, the Director of the OSCE Academy welcomed the members of the Diplomatic Corps, partners and donors as well as parents and friends of the graduates and gave an overview of the last 16 months that students spent at the OSCE Academy. During the opening speech, Dr. Wolters also expressed the Academy’s sincere gratitude to the Board of Trustees, donors and partners for advocacy, guidance and continuous support that allows creating all the necessary conditions to provide with education of international standards.

Ambassador Dr. Pierre von Arx, Chairman of the Board of Trustees, the Head of the OSCE Programme in Bishkek greeted the guests of the ceremony and, during his address to the graduating students, gave three pieces of advice that would help them succeed in their professional lives: "Challenge yourself every day. Do not be afraid to make mistakes. Be best and be hardworking. The world is belonging to those who work hard…” Following the Ambassador’s address representatives of the Ministry of Foreign Affairs of the Kyrgyz Republic - Mr. Ulan Daniyarov, Deputy Head of the 5th Political Department; and of the Ministry of Education and Sciences of the Kyrgyz Republic – Ms. Damira Alibaeva, representing the Ministry’s legal department, congratulated students with their achievements of completing their studies in such a unique institution as the OSCE Academy.

The key note speech was delivered by Ambassador Christian Dussey, the Director of the Academy's long-time partner and member of the Board of Trustees – the Geneva Center for Security Policy, who visited Kyrgyzstan specifically to attend the Graduation Ceremony. In his motivation speech Ambassador Dussey discussed how the world that the students are entering after graduation is changing rapidly and what it will take to be able to live in such world. He concluded with highlighting the importance of the ability to learn not only during regular studies, but throughout the entire life: "...as was said before, you are going to be the Ambassadors of Central Asia, but I ask you also to be the Ambassadors of learning, the Ambassador of adaptation, the Ambassadors of collaboration.”

Following the speeches students received their Diplomas awarded by Ambassador von Arx and Dr. Wolters. The programme continued with the greetings from the Professors represented by Dr. Anja Mihr and Dr. Nazgul Jenish and the announcement of nominees for Best Thesis awards and Top GPA Awards. Nominees received certificates and prizes for their outstanding academic achievements. As of December 2019 the total number of alumni has thus reached 520. 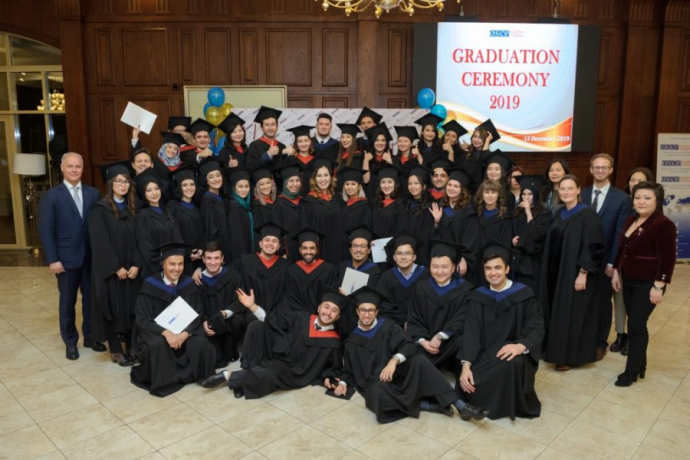